Wharton Professor Adam Grant is on tour for his latest book, "Originals: How Nonconformists Move the World" 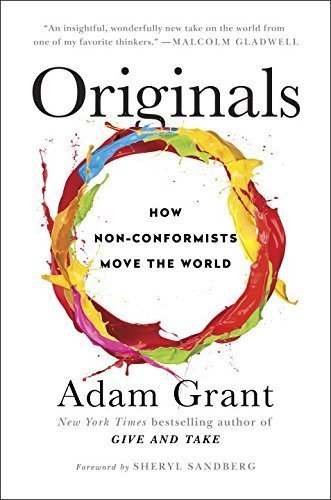 The bestselling author of Give and Take, Adam Grant is back with a new look at what it takes to change the world—this time by embracing originality. Sharing stories from the fields of business, politics, sports, and entertainment, Grant reveals how outside-of-the-box thinking need not be as game-changing as the iPhone to impact the world. He explores what individuals and organizations can do to foster creativity, recognize good ideas, speak up without getting silenced, and fight groupthink. At what's sure to be an inspiring signing and discussion, Grant will explore the power of nonconformity in conversation with Jeff Ashby, retired NASA astronaut and chief of mission assurance at Blue Origin.

Adam Grant is Wharton's top-rated teacher. He has been recognized as one of HR's most influential international thinkers, BusinessWeek's favorite professors, the world's 40 best business professors under 40, and Malcolm Gladwell's favorite social science writers. Grant was tenured at Wharton while still in his twenties and has been honored with the Excellence in Teaching Award for every class he has taught. His first book, Give and Take, was a New York Times bestseller translated into twenty-seven languages and named one of the best books of 2013 by Amazon, Apple, the Financial Times, and the Wall Street Journal–as well as one of Oprah's riveting reads, Fortune's must-read business books, Harvard Business Review's ideas that shaped management, and the Washington Post's books every leader should read. His speaking and consulting clients include Google, the NFL, Merck, Goldman Sachs, Disney Pixar, the United Nations, and the U.S. Army and Navy. He serves as a contributing op-ed writer for the New York Times and was profiled in a cover story by its magazine. Grant earned his Ph.D. in organizational psychology from the University of Michigan and his B.A. from Harvard. He is a former junior Olympic springboard diver and magician.